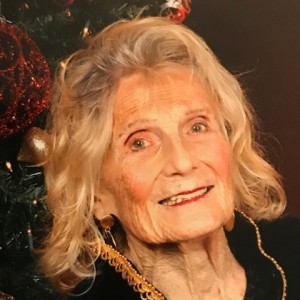 Stella Tarabicos Katsanos passed from this life at age 96, surrounded by her loving daughters on May 7, 2021.

Born in September 1924, Stella was the first generation Greek-American child (Stavroula) of Lillian and Charles Tarabicos.  Charles was an early cultivator of the Wilmington Greek Community, who helped spearhead the construction of Holy Trinity Greek Orthodox Church, along with local leaders Govatos, Boines, Kramedis, Gouvas, Haldas, Laskaris, Lazopoulos, Cozamanis, Manis, and others.

After graduating from Centenary College, and while attending a Greek dance in 1951, Stella met the handsome Konstantine “Jack” Katsanos of Philadelphia, who became her lifelong husband until his passing in 2016. Together they travelled to many European cities while Jack stationed in Heidelberg, Germany during the Korean War. Stella will be buried alongside Jack at Delaware Veterans Cemetery, Bear DE, in a private ceremony.

During the 1950’s, they operated the Kent Hotel and Restaurant on Market Street, a “prika” gift from Stella’s father Charlie, and opened daily by Jack’s brother Chris Katsanos.

Stella and Jack were blessed with two daughters, Jasmine (David Lawther) and Constance, with whom she lived in her final years. They both adored their three grandsons, Eric (Holly) and Evan (Katie) Smith, and Jackson Langhans. Stella became great-grandmother to Milo, Jove, and Barrett Smith, whose photos brought her big smiles.

Throughout her life, Stella enjoyed special relationships with her three first cousins on both sides, Voula Manis and family of Wilmington,  as well as the Nicholas Munger family and the Economy family, both of Roanoke, VA. She maintained close ties with the Demetral sisters – Elaine, Georgia, and especially Dorothy who was named after Stella’s deceased sister.  Both Stella and Jack shared exceptionally good times in the company of Jack’s brother, Chris Katsanos, wife Chrisanthi, and their children, Katina (John), Van (Janine), and Nicole (Jimmy) in Havertown, PA.

During her active years, Stella rescued and rode several horses, including a Harrington, DE. harness-racer named Pete who lived to age 26 on her land. She saved many shelter pets and sadly leaves behind her faithful, white poodle, Apollo.

A special Thank You to caregiver Donna Malinowski, who beautifully cared for Stella in her final years at daughter Connie’s Seaford home – along with Gail Johnson.

Rest in Peace, Stella. May your memory be eternal.

A Viewing will be held Monday, May 17, 2021 from 2pm to 4pm at Brandywine Valley Funeral Care, 412 Philadelphia Pike, Wilmington, DE 19809. Holy Trinity’s Father Phil will provide blessing and sermon. All attending will be required to wear a face mask and practice social distancing to maintain compliance with State COVID-19 Regulations. Admittance will be regulated.